Future Lovecraft, the new Innsmouth Free Press anthology is out now. Well, it's been officially in the wild for a few weeks now so if you got a shiny eBook reader for Solstice, Christmas, Hanuka or whatever you celebrate go and buy it, also available in paperback format if you're more "traditional" (besides IFP print books are beautiful). So there's no excuse to keep your claws and/or tentacles away from this nice piece of lovecraftian reading.

"Tloque Nahuaque", my short story on the real nature of the Higgs boson and other weird math objects, is part of the TOC and you can read it here as a sample of the book.

On December 15, some of the anthology authors joined in conversation with our readers in a tweet-athon in which we talk about our texts, Lovecraft, brains in jars things of the like. As you can imagine, sanity decreased as time past, so it was a nice enjoyable chat. I even tried (just tried) to live-write a few flash fiction tweets which I transcribe here unedited (it was my first time doing that in English since it's easier for me look for variations and so on in Spanish, so let me know what you think): 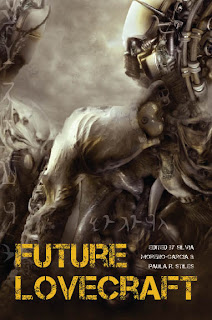 There wont be flying cars in the future cities. Who needs them when you can have byakhees?

When they said eBook-reader, I thought they were talking about a robot who'd read to me before sleep... [as a footnote for the picture above]


The 2053 edition of Miss Universe was, at last, won by a non earthling: Miss Yuggoth shone that night in her fungal beauty.


"Racist!", she yelled and walked away notoriously angry. She'd been called clean human and no-gills, but scaleless was rude.


The customs officer told the Mi-Go its passport wasn't valid anymore. The planet of origin was now Pluto, not Yuggoth.


The fortune teller said something about love-craft in my future. But an etsy enthusiasts fair? Really? No cultists?


Yes, Virginia, there is an Azathoth.

Somehow I think the only one with potencial was the Miss Universe one. I'll work on some variations and post them here and on Twitter soon.

I know that when I say "soon" it can mean anything since this blog started kind of abandoned and hasn't met a good pace yet, but that will definitely change next year. Check this out in the mean time:


So that was the "Lovecraft", but what about the future?

2012 will be a good year. I'm plotting and working on short fiction to send at least a couple of submissions per month (hopefully) and my short story/mutant collection El Escaque y otros trebejos (in Spanish) will be out as an iPad app. It looks beautiful.
What are your plans for next year?

Thanks for reading and have a wonderful New Year's Eve.
Feliz año nuevo. Abrazos tentaculares ^^.